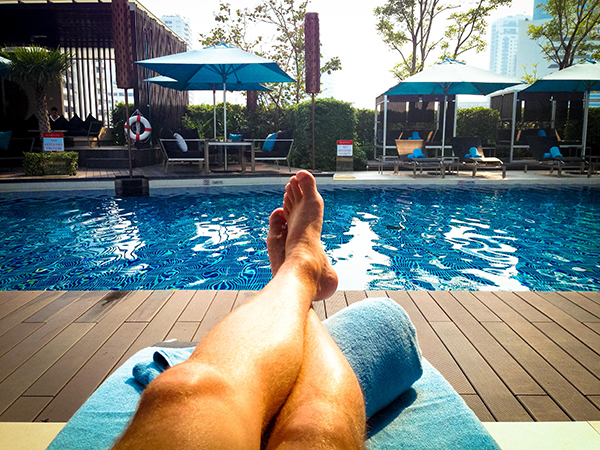 Zac Erawan`s insider raves and reviews on the top hotels available and those that are to open in the near future have helped give an insight into what is available for countless travelers to plan that perfect getaway in Thailand. Once upon a time, he was a bank desk jockey, but his restless feet fled out that door and took him to Asia, where twenty years later, he still calls it home.

His lusty passion for decadent upmarket hotels and resorts got off to a rocky start. At 19, armed with his first credit card and a plan to treat his girlfriend to an unforgettable anniversary, he checked them into a Park Hyatt property. However, when he checked his card balance the next day, he discovered he had no available credit.

I went down to the front desk, shaking and told them my dilemma in a squeaky voice,” he remembers. “They chuckled and said that they had already blocked off $1000 on the card upon check-in, apparently a common practice in that country.

Another time he mega splurged on his mother for her birthday with a night at the Park Hyatt Sydney. Her response to this indulgent gesture: “It is just a place to sleep!” To Erawan, no hotel is just a place to put your head on a pillow. He says, “Hotels are total pleasure cocoons to immerse your self into.” His fascination with luxurious upmarket hotels began in his late teens and has no signs of abating in the near future. He said, “I would rather spend fewer nights in total indulgence than compromise and have more nights in a cheaper hotel.” In the past, some of his ex-girlfriends have had trouble with handling his addiction, as they were forced to become paupers for the next few weeks after such an event.

His first solo adventure in an Asian paradise was slave labor of the “washing dishes” variety in a very isolated hotel in the Japanese alps, 16 hours a day. He hated being a “ceramic technician”, but during this time whiling away the hours in a kitchen dungeon, it reinforced his love of the hospitality and hotel industry for its vibrant, hectic, creative ebb and flow. As like numerous Western males in Asia, he succumbed to the wiles of an Asian lady and very quickly married. He states with a smile, “The marriage didn’t last, but my love of Thailand and hotels did.”

Erawan has since transformed into a Thai hotel guru, as he sleuths around the country discovering what’s opening, happening, and who is sleeping with whom in the hotel branding industry. He is an aspiring photo buff and loves writing reviews and profiles on properties, from the lush jungles of Chiang Mai to the famed beaches of Phuket. His knowledge comes from hundreds of trips throughout Thailand and insider tips, which take vacations from ho-hum to a once-in-a-lifetime experience. While NewThaiHotels has been his most enduring labor of love, he is always on the lookout for new interesting ideas and has a few more projects in the pipeline.

*Definition of Xenodocheionology: n. jocular, love of hotels and inns.