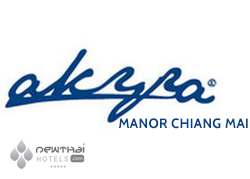 The two are teaming up to expand the trendy akyra brand into exciting and booming Chiang Mai.

Already we’re getting information on what cool design features to expect at akyra Manor Chiang Mai, which is scheduled to open in the third quarter of 2014.  29 suites and residences with stylish, modern and warm décor will be spread out over seven floors.  The resort will be focused on healthy living and a healthy environment starting with the country’s first organic rooftop nursery.  Similar to those in cities like New York, it will provide ingredients for the resort’s SLOW food concept which aims to utilize home-grown food whenever possible.  It also acts as a natural cooling system.  Guests will relax at akyra Manor Chiang Mai’s pool and grab drinks at the nearby bar.  An executive meeting room for business or private events is also in the works.

Akrya Manor Chiang Mai will be located at Soi 9 Nimmanhaemin Road, one of the most fashionable streets in city.  It’s lined with intimate bars and restaurants featuring cuisine from around the world and is a perfect base from which to explore the city.

“Nimmanhaemin is a hip and happening precinct that is quickly growing in fame beyond the gates of Chiang Mai,” says AHMS founder and owner Anchalika Kijkanakorn. “We want to tap into that, but also give the area another great point of interest in terms of wow architecture and hospitality and hopefully even raise the bar a bit in terms of what Chiang Mai offers in guest experiences.”

The project partnership announcement follows other development news from AHMS.  This summer, the hotel group announced plans to open the AKARYN Koh Krabeay Retreat & Spa, situated on its own island in Cambodia.  Like akyra Manor Chiang Mai, the resort will also focus on sustainability and environmental preservation and will feature 40 luxurious pool villas and a holistic and medical spa.  It’s scheduled to open in 2015. To get an idea of what to expect, check out the other properties run by Akaryn listed below.

Other properties by Akaryn

Sireeampan Boutique Resort & Spa Opens Today in Chiang Mai, Thailand
Chiang Mai
This entry was posted on Monday, November 25th, 2013 at 5:43 pm and is filed under News. You can follow any responses to this entry through the RSS 2.0 feed. You can skip to the end and leave a response. Pinging is currently not allowed.