A few years back, Hawaii-based Outrigger Hotels and Resorts announced an agreement to acquire the massive 245-room Laguna Beach Resort in Phuket.

It was the company’s first major investment in the Asia-Pacific region.  Also announced was a full renovation of all rooms and public spaces with a plan to reopen as the Outrigger Laguna Phuket Beach Resort in 2013.  That day has officially arrived and guests are welcome to book at the rebranded property on the northwest coast of Phuket. 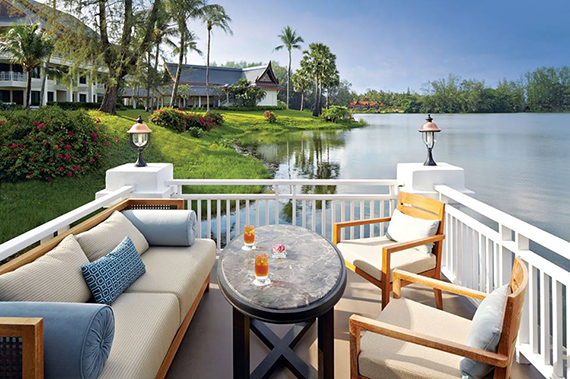 Originally opened in 1991, it’s easy to see why the property was desirable to Outrigger Hotels.  It’s perfectly located between a calm tropical lagoon and the Andaman Sea.  The easily-accessed beachfront stretches for miles and the white sands contrast beautifully with the aquamarine blue of the water.

The renovation gave a contemporary and luxurious yet comfortably livable facelift to rooms at the resort.  All rooms boast private balconies and bathrooms feature separate showers and sunken tubs.  Rooms are decorated in natural woods and white linens with bright fabric runners draped across the beds.  For families with young ones, video games can be set up in the rooms upon request.  WIFI is complimentary throughout the hotel and in all guestrooms making staying in touch a breeze.

While the resort does not have a spa at this time, the renowned Banyan Tree Spa Phuket and Angsana Spa Phuket are located in the greater resort community.  Dozens of restaurants and bars, shopping and the Laguna Phuket Golf Club are also nearby and easily accessible via a complimentary trolley bus and ferry service.

Holiday Inn and Outrigger open their doors in Southern Thailand

Incredible prices at newly opened Splash Beach Resort Mai Khao Phuket
Phuket
This entry was posted on Tuesday, June 18th, 2013 at 9:01 am and is filed under Rebrandings. You can follow any responses to this entry through the RSS 2.0 feed. You can skip to the end and leave a response. Pinging is currently not allowed.