New W Bangkok to Open in December with Whatever/Whenever Service The W Hotel brand is preparing to open their new Bangkok, Thailand property this December and they’re bringing W signature style and comfort with them.  The 400+ guestroom hotel is located in the lively and popular Embassy Row district next to the former Russian embassy. 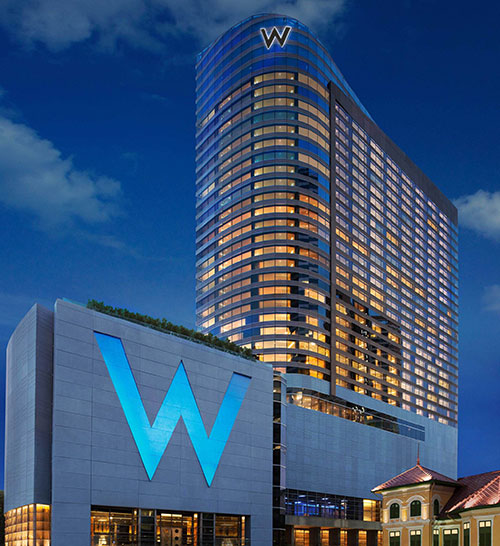 There’s a reason W Hotels have such a fan following.  They’re a stylish group of properties that don’t take themselves too seriously and yet manage to remain sophisticated.  Besides their Whatever/Whenever service- a promise to deliver on guests’ every whim provided they’re not illegal or dangerous- all rooms also come with the famed Munchie Box, W signature bed and pillow menu, Bliss toiletries and state-of-the-art entertainment systems.

The W Bangkok has all of that in addition to a Living Room lounge, a Bliss spa, and pet-friendly rooms as long as your furry best friend weighs in at 40 lbs. (18 kilograms) or less.  It also boasts several restaurant options.  The Kitchen Table serves up Thai and international dishes.  The Kitchen Pantry is deli-style with delicious options available quickly.  Finally Woobar offers a list of unique cocktails and a place to wind down after a long day or wind up for a night on the town.

The W Bangkok will be a great jumping off point for Bangkok exploration.  It’s located near the Skytrain making travel to and from the airport as well as around the city very convenient.  The Grand Palace and National Museum are just over five miles away.  Great shopping can be found within a four mile radius.  A number of convention centers, corporate offices, and embassies are also nearby.

Unfortunately I only have access to the stock pre-release photos of this hotel at the moment but I will be staying there during the opening week (no soft opening), so I will be posting plenty of photos here, on my Thai hotels Flickr account as well as a full review on my review site, ReserveThaiHotels.net.

W Hotels Worldwide has big plans for expansion in Asia during the next three years.  They’re talking about building at least ten new hotels following the W Bangkok including in China, Macau, India, Malaysia and Indonesia.  They already have one other Thailand property in Koh Samui.

As for the W Bangkok, it will officially open December 7.  Reservations can be made by visiting http://www.starwoodhotels.com/whotels/property/overview/index.html?propertyID=3258.  There’s little doubt the famous W service combined with traditional Thai hospitality will make this one of the friendliest stays in the capitol city.

New Four Points by Sheraton Bangkok to open in October

New compact sleepbox service ‘Boxtel’ opens at Suvarnabhumi Airport
Bangkok Starwood
This entry was posted on Tuesday, October 30th, 2012 at 4:25 pm and is filed under Openings. You can follow any responses to this entry through the RSS 2.0 feed. You can leave a response, or trackback from your own site.