Two for One? Accor Opens Two New Bangkok Properties Under One Roof 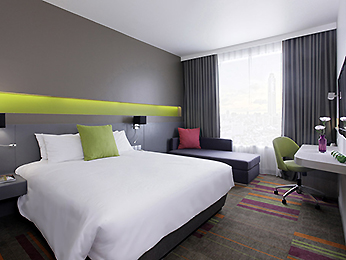 If one is good then two is better, right?  That’s what the Accor brand is banking on with the opening of two new properties under the same roof in Bangkok.  The Mercure Bangkok Siam and ibis Bangkok Siam share the same prime location, same number of rooms and same friendly service.  Where they differ however, is the type of budget each caters to.

The Mercure Bangkok Siam is aimed at midscale travelers with a selection of spacious rooms and a warm, modern style.  Rooms are done up in sleek grey colors accented with playful fluorescents.  Accommodation options range from superior to privilege to suite rooms with bathrooms outfitted with showers and hair dryers.

With so much new construction happening on the beaches of Thailand, it can be easy to overlook what’s going on in other parts of this diverse country.  However, that would be a mistake.  Case in point- the up and coming and very sophisticated Sala Lanna Chiang Mai.  Currently, reservations are being accepted from today April 1st, 2013.

Home-grown luxury hotel brand Sala Resorts and Spas is getting ready to unveil their latest property, a seriously boutique Bangkok venture with some seriously great views.

Sala Rattanakosin is located on the Chao Phraya River, across the water from the historic Temple of the Dawn. The neighborhood is known as Old Town, a formerly walled part of the city, and is home to many of Bangkok’s most famous attractions including the Temple of the Emerald Buddha, Temple of the Reclining Buddha (Wat Pho) and the National Museum.  The hotel is also just a few minutes’ walk to fantastic culture, food and shopping.

The Senses Resort- One Part Fun, One Part Style

Chic The Senses Resort is the newest addition to Patong’s getaway scene and resort managers vow to build a loyal following of repeat guests.

To do so, they’ve unveiled a company philosophy that echoes their name: a sense to serve guests instinctively, a sense of warm welcome and a sense of natural service within the environment.

The Senses Resort is positioned on a thickly forested hill in Patong overlooking the colorful city and the sparkling Andaman Sea.  It’s located about five minutes from Patong Beach, 30 minutes from Phuket Town and 45 minutes from Phuket International Airport. The resort is comprised of eight modern buildings, housing guestrooms as well as dining options, an outdoor pool, the Just Play fitness center and Unwind Spa.  In addition, The Senses Resort offers scrumptious and spicy Thai cooking classes and the Smiley Face Club for the smallest vacationers.

The modern conveniences at the newly opened Hua Chang Heritage Hotel make it comfortable, but it’s the interpretations of classic elements that make it beautiful. The boutique property is a mix of Thai and Western design, inspired by the King Rama V-era of Thailand and turn-of-the-century Europe.