The most exciting announcement regarding hotels in Thailand in years. -me.

Hyatt has announced the development of the Park Hyatt Bangkok, set to open in 2014 in the new upscale Central Embassy project on the corner of Wireless and Ploenchit Roads in central Bangkok.
See 65 more photos & check rates now at Park Hyatt Bangkok

Part of the USD340 million 37 floor Central Embassy project currently under construction, the hotel will form an integral part of Bangkok’s newest and most ambitious high-end luxury retail, entertainment and lifestyle venue. 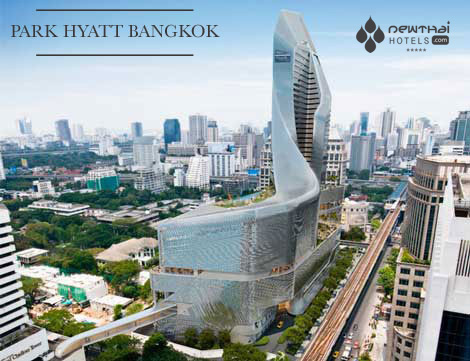 Park Hyatt Bangkok will feature 222 rooms, including 49 suites. Average rooms sizes are slated at around 50 square meters. The hotel will of course feature “all-day dining and specialty restaurants, a lobby lounge and specialty lounge, as well as a sky bar and restaurant with magnificent views of downtown Bangkok. There will also be 15,515 square-feet of meeting space and amenities including a spa, business center, fitness room and swimming pool.”

As for price, Zulki Othman, the area director for sales and marketing in Southeast Asia for Hyatt Hotels & Resorts, says the hotel plans to maintain rates in the same vicinity as the recently opened super luxurious St Regis Bangkok. This will place rooms in the USD300 range, which is considerably higher than most 5 star hotels in Bangkok. “We won’t play with pricing,” said Mr Othman.

This will be the third Hyatt property in Thailand, following the Grand Hyatt Erawan, also in Bangkok, and the Hyatt Regency Hua Hin. Plans are also underway to open Thailand’s second Park Hyatt Hotel in Phuket, at Siray Bay, not far from the Westin Siray Bay.

The Park Hyatt Bangkok will be located atop (my speculation) the Central Embassy complex on the corner of Wireless and Ploenchit Roads on property purchased from the British embassy, which used to be the extensive front gardens of the embassy- hence the name.

Two BTS Skytrain stations are within walking distance and Central Chidlom shopping complex is across the street.

You can see signs of construction including the foundation pylons in the background of this photo taken last year from Sivatel Bangkok, which is located on Wireless road directly across from the British Embassy. 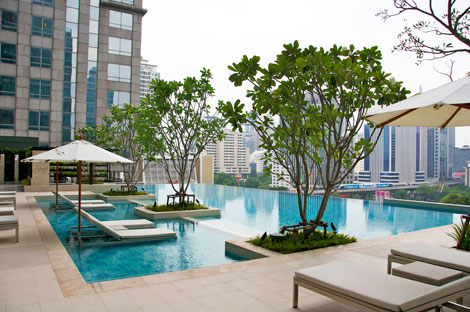 Central Embassy is an ambitious mixed use project by one of  Thailand’s leading retailers Central Group.
The 37-floor complex promises to revolutionize future luxury shopping and entertainment experience with an 8-story retail space of 150 stores and lifestyle podium, verdant sky terraces and a luxury hotel tower sprawling over a total commercial area of 144,000 sq m.

“We are delighted and honored to enter into this agreement for Park Hyatt Bangkok,” said Chart Chirathivat, Managing Director – Central Embassy, Central Retail Corporation Ltd.  “The union between a prestigious brand such as Park Hyatt, which is renowned for its outstanding service standard, and Central Embassy, a world-class luxury venture, will result in the perfect, seamless integration. Having Park Hyatt as a part of the Central Embassy project will surely put this luxury retail landmark on the world map, highlighting Central Embassy’s key philosophy of Infinite Connections.” – From Hyatt Press Release

Five Reasons To Book The Park Hyatt Bangkok
Bangkok Hyatt
This entry was posted on Tuesday, February 21st, 2012 at 12:36 pm and is filed under News. You can follow any responses to this entry through the RSS 2.0 feed. You can leave a response, or trackback from your own site.