The Berkeley Hotel Opens in Pratunam District of Bangkok

…One of the most highly anticipated hotel openings in Bangkok this year.

If search referral terms and traffic is any indication, The Berkeley Hotel Pratunam, which just opened this past Saturday, June 1, is one of the most highly anticipated hotel openings in Bangkok this year.  While not really my style- the shiny brass & marble lobby and large rooms seem destined to be filled with busloads of Chinese tourists- it is a sleek property in one of Bangkok’s hip shopping districts.
See 65 more photos & check rates at Berkeley Hotel Pratunam 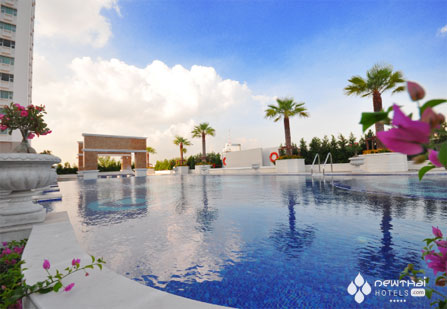 All together, The Berkeley Hotel offers 765 rooms in various configurations spread throughout two towers including the premiere styles mentioned above as well as luxury rooms and suites.

Sizes range from 35 square meters to 52 square meters and all are equipped with a full range of amenities.  They’re decorated in neutral colors with pops of bright orange, modern wall art and white linens.  Guests can relax in bed and watch the flat screen television or work at the desk mounted along the wall.

The  large pool has a separate area for the kids and elaborately tiled floors.  Potted palms line the outdoor patio which looks out over the city.  A multi-regional restaurant with what the hotel describes as a “show kitchen buffet” serves up Thai, Indian, Italian, Japanese and Chinese dishes by a Michelin-starred chef as well as a la carte options.  The ballroom and various function facilities are prepared for everything from intimate group meeting to banquets up to 1,800 people.

The hotel is well-positioned in the heart of the Pratunam District.  It is 30 minutes from the airport and mere meters from the pier to Golden Mountain and the Grand Palace area.  Great shopping at the Platinum Fashion Mall, Pantip Plaza and Central World/Gaysorn Plaza are less than 550 meters walk.  Best of all, it’s close to small boutiques and great local restaurants, encouraging exploration of this bustling district.

Two for One? Accor Opens Two New Bangkok Properties Under One Roof

TCC Group to Build US$3.5 Billion Integrated District Called ‘One Bangkok’ in Bangkok City-centre
Bangkok
This entry was posted on Tuesday, June 4th, 2013 at 9:06 am and is filed under Openings. You can follow any responses to this entry through the RSS 2.0 feed. You can skip to the end and leave a response. Pinging is currently not allowed.